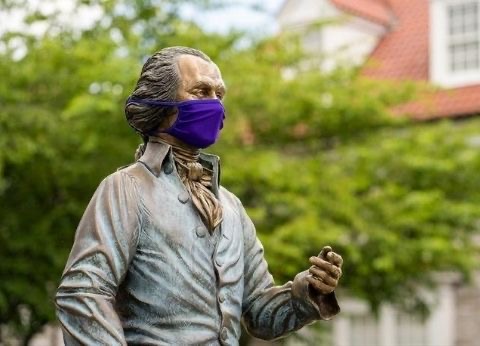 Little late in posting this, we are almost to the end of week 3!

I’ve been trying to keep busy.  So far, I seem to have achieved that for the most part.  Keeping up with my evening workouts and fiddling with some 3D printing has consumed some of the free time.  I have also started the podcast back up.  More on that after I post a couple episodes.

The boys are doing well.  We did our weekly FaceTime last Saturday (Ben was hiking on Sunday so he was “too busy”).  They seemed good and Josh was his typical self (I made a dad joke and he really played up his response to mock me- it had me laughing pretty hard and missing having him around).  At the time Josh had one class in person (Japanese – he showed us the clear face shield they wear in class) and Ben had a couple of classes that were either in person or a hybrid (half the class is live one day a week while the other is remote and then they switch).

Most of that changed for Ben this week when his school announced they were going fully online for at least the month of September.  They have had a steep increase in the number of COVID cases and are reacting in a, in my opinion, strange way.  They are sending home all students (who live on campus, which makes Ben exempt) who are not already quarantined or in contact with someone who has tested positive.  They have several exemptions (one of which is poor internet connection at home) and are keeping all the dining services up and running but moving all classes to online.

Ben seems fine with this.  He is going to stay in his townhouse with his roommates and ride it out for a while.  I believe the plan to go back in a month is silly.  I can’t imagine things will improve that much other than the fact that they will have fewer people on campus, those on campus will be locked down and as such, the spread will subside until people come back.  The university is too big to expect the kids to remain isolated.

Josh’s school, on the other hand, is small and tested everyone when they arrived after requiring a two week self quarantine before coming.  That seems to have helped a lot as they only have reported one positive test (compared to 500 at Ben’s school).  Additionally, with Josh’s school being small, they can more easily keep everyone in a “bubble”.  Ben’s school is exponentially larger and much more spread out with a lot of off campus housing.

But outside fo COVID, Josh seems to be making some friends and most importantly, has a friend down the hall with a printer.  He is generally resourceful that way, finding the right people and connecting with the right resources.  Ben was the guy with the printer on his hall last year, which worked out well for him to be“the printer guy”..  Both boys seem to be adjusting well. Josh is hoping to get involved with the club soccer team.  Fingers crossed as that is one of his passions.

As for the Empty Nest, I have continued some straightening up trying not to go too overboard and make it look like they aren’t coming back.  Mainly, my goal this past weekend was to unbury the pool table.  Mission Accomplished!!  Now, I just need to put away some of the stuff they left around (and under the edges) of the pool table and we can actually use it!  The pool table has been the spot for school projects and storage, with the most recent use as the staging area as the boys prepared their college stuff.  Not all of their stuff made the cut to go with them so the remnants were left for me.  Not too much but enough to warrant a Ismall) weekend project.

So, surviving the Syndrome for now.  I think with the possibility Ben will come back home the Empty Nest feeling is a little in limbo.  I realize any day now he could be home for a month or the next couple.  So, that too is a good distraction.  We will see how it goes.