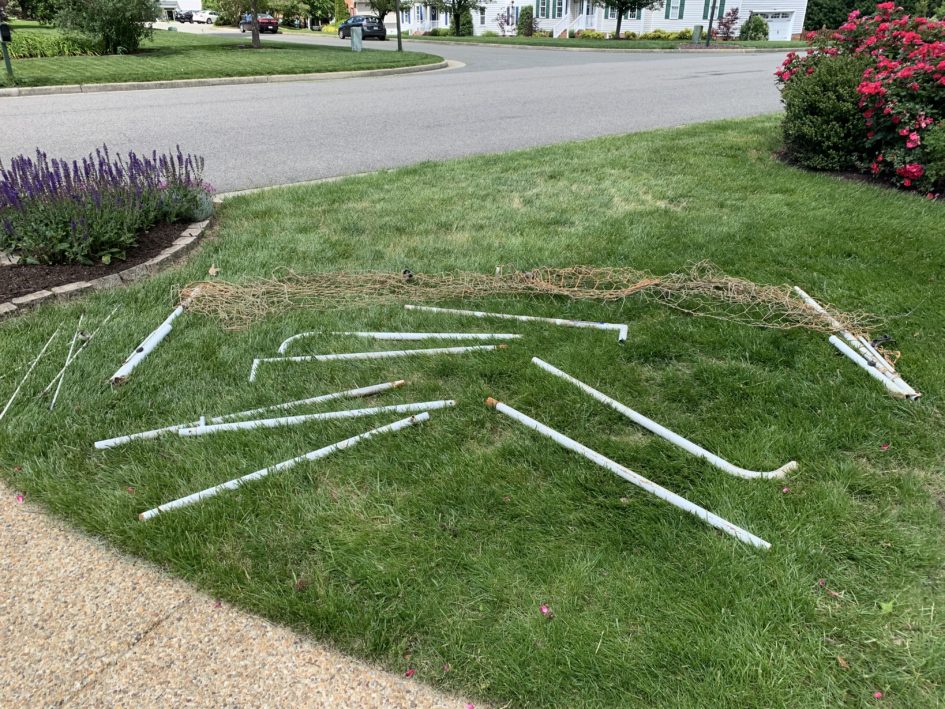 For years we have had a soccer goal in our front yard.  I know the neighbors probably hated it (but got used to it).  I am surprised the HOA didn’t give us nasty letters.  And even more amazed that errant shots never damaged my next door neighbors house (that we know of).

The soccer goal was made to easily collapse and store away but my son left it up for convenience.  It had eventually rusted and aged to a great degree but still did it’s job.  He and his friends would play around in our little front yard, dodging the couple of trees that were in the way, and practice their skills (mainly of trash talking).  They would go out late at night and shoot around in the light of the front porch.   The goal got a lot of use and took a good beating but held in there.

Eventually as they got older and were able to drive they realized that a ten minute trip to a real field created a better environment and more space.  The front yard goal still got some use but more out of boredom than true practice.  But we left it up, in all of its glory.

Eventually I talked my son into letting me take it down.  While COVID prevented friends from coming over and congregating, there was little use of it.  And with him starting to look toward college, he agreed that there was no real reason to leave it up.  So with a good bit of effort (did I mention it had rusted and aged?), I disassembled the goal and hauled it off to the dump.

It was bittersweet.  There were a lot of memories tied to that goal.  Memories of my sons and friends playing at the house.  I even remembered back to when we bought it and set it up.  My youngest was so excited!  It was really a symbol of a segment or chpater of our lives that was coming to a close.  A segment with everyone around, a full house many times, and lots of activity and energy.  And a reminder that the next chapter is on the horizon.

Sunday we moved my oldest back to school.  He and several friends from his Freshman hall have a townhouse.  He was very anxious to get back (especially after COVD shortened his Spring semester and he has spent the whole Summer working on online classes to catch up on his Calculus requirements).  But he seemed also a little apprehensive.  Not so much because he is away from home – that played out more last year – but I think because he is even more independent by living off campus and has more responsibilities (first and foremost, he was the one who ordered and set up the internet for the group!).  Both things are very good for him but I understand a little bit of nervousness.  It makes complete sense and I feel a little of it for him as well.

In less than a week my youngest will be moving into his Freshman dorm.  That move is going to be hard.  Letting the oldest go last year was made a little easier knowing there was still one at home.  There were still sports and school events to keep track of and attend and tie up my mind.  There was someone to watch guy movies with and joke around.  Now they will both be gone (assuming COVID doesn’t send them right back home).  It is going to be so different.

I intend to keep blogging (I’ll have more time) about this adjustment.  It might get more interesting, it may be less.  Going into the unknown – have to see what it is like when I get there.  And the unknown will be here in less than a week.