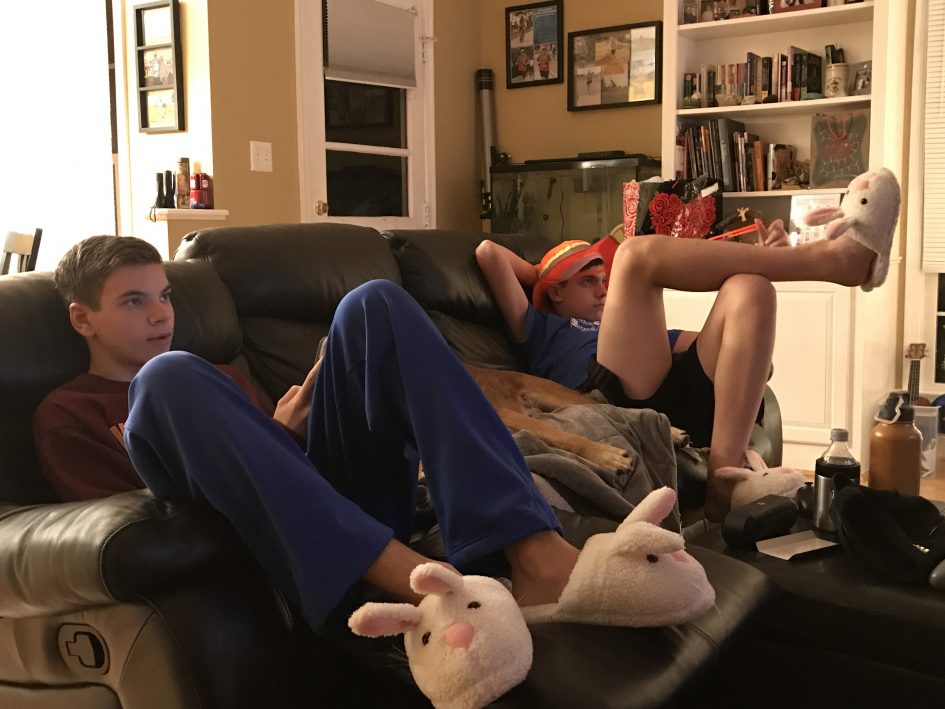 With the way the end of the year went, the realization came subtly.  COVID-19 shut down the schools and with it, disrupted the morning routine for everyone.  It didn’t take long for our high school senior to realize he could sleep in (and subsequently stay up later).  Our college freshman was home earlier than expected while his semester switched to online but he has never been much of a morning person – morning socialization ended a long time ago with him.

But with the youngest, we had decent morning interactions while eating breakfast or watching the morning news.  As the boys became older and more self-sufficient, our interactions in the morning became less, which was a good and natural evolution.  Looking back to the days when I had to guide their every move, it seems very stressful.  Once they could dress, shower and feed themselves, things got a lot easier.

One big transition was Middle School.  I was told by my oldest that parents did not come out to the Middle School bus stop.  I still watched from the window for a while, if for no other reason than to make sure the bus came and I didn’t need to make an emergency taxi to school (that happened more times than I liked).  Then the big change was when the oldest could drive.  I still had to make sure they were up and got out the door on time but the liberty of having him drive them to school was true joy.

My oldest has always been a night owl.  He has required some pushing to get up in the mornings so even as he became more independent, watching the clock to make sure he was up on time was required.  The youngest was our morning person but with COVID came staying up later playing video games with friends and then sleeping in later.  With assignments scheduled over a period of time and nothing too challenging, he blew through the “work from home” program pretty quickly and was free to spend the rest of the year like it was Summer.  The loss of our morning routine was inevitable but again, came sooner than planned.

So I have been transitioning to a different morning routine.  Focusing on exercise has been the primary use of my mornings.  I still get up around 6AM and can spend an hour running, walking or riding the stationary bike.  I have also been able to knock out some work early and from time to time, try to learn something new (watching a video or Udemy segment while walking on the treadmill kills two birds with one stone).  I have even dabbled in meditation (and have to admit I was surprised at the level of focus it seems to invoke).  I guess these activities will become the new norm for my mornings.

While looking back to when the boys were young, when food was flying and stress just to get to work on time was high, I don’t necessarily want to return to that world.  It does bring back some great memories but also some nightmares of rushed drop offs at daycare and last school buses.  In some ways, having the kids dependent on you gives you meaning and while you strive to make them more self-sufficient (and it would seem that is part of our job), sometimes you miss the old days.  Most times you don’t.  And you realize what you have accomplished by raising good, independent young adults.  You find joy in that.  While you eat your breakfast alone.