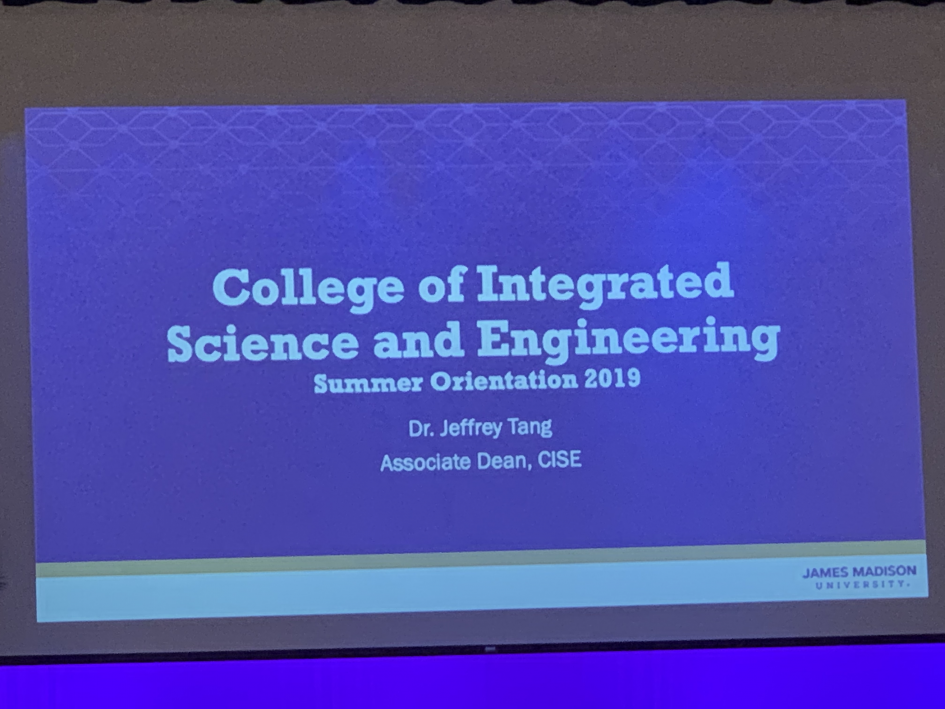 It has been a busy few days.  The high point was college orientation on Thursday.  A day long event that didn’t involve a lot of exercise but wore me out none-the-less.  They presented a lot of information.

We knew we had to leave early Thursday morning – around 5AM for the two hour drive to make sure we were there for the 7:30 start.  So to say I was a little upset with my college bound son when he stayed at his girlfriend’s longer than we had agreed is an understatement.  As such, I had him do some extra chores around the house to help me clean a few things up and we also got some paperwork together for orientation.

When the alarm went off at 4:30AM it was very unwelcome.  My son slept in the back seat on our way there and I loaded up with coffee.  The drive wasn’t too bad and we made it with some time to spare.

The first few events had us sitting is a large auditorium.  They had food and coffee in the lobby but we weren’t permitted to bring it into the auditorium so a couple of half cups of coffee went to waste.  The presentations were informative and mostly kept my attention. The student Orientation reps were very energetic and appears to be well trained/informed.

After the first two presentations the students went off on their own to meet with their advisors and do some other bonding exercises after breaking up into groups based on their college of study.  Parents were given additional information about services available and a chance to talk to reps from the various groups to get questions answered. It reminded me of the club signup from Pitch Perfect.  I joked later that I signed Ben up for glee club.

After lunch there were a couple other presentations, the first by a counselor from their health services.  She was very funny and kept us entertained. Then to round out the day, they had a Q&A session with a few students.  Getting their perspective on topics around campus culture and what their toughest times were getting acquainted was helpful.  In the last session the director of the session explained the details of moving in and orientation in August.

Overall the day was heavy on info but it was good info.  When I rejoined with Ben he seemed in good spirits, said he had met a few friends and was very proud to show my his student ID.  We hit the bookstore before we left (we had a 20% off coupon so we set off to make the most of it only to find out when we got to the register it was 20% off one item) and stocked up on moew JMU Dukes gear.  On the ride out of town I got Ben to share some of his thoughts for the day. All in all, he had a good experience.

Our timing was such that we were going to get back into town about the same time Josh’s summer outdoor league game was going to start.  Ben fell asleep again in the back seat and even though I told him we were going to watch the game, he was surprised he didn’t wake up at home in the driveway.  The game was close, they won 5-4, and entertaining. They seem to have a lot of fun doing the summer league with low expectations so any productive play is just icing on the cake.

Friday was spent getting caught up from the day out at work and in the evening, just taking time to breathe.  Josh was up for watching a movie so we fired up Netflix and goofed on “Murder Mystery”. It was fun.

So a busy few days.  Originally we had planned to go to the beach today (Saturday) but didn’t make appropriate plans for the dogs to allow our escape.  Josh and I talked about going up to the DC United game but none of his friends could make it so we bailed on the idea. Today has been spent working on various projects including a highlight video for Josh’s high school season to add to his recruiting videos and some tinkering with 3D design.  Tomorrow will include laundry, some yard work, dishes (the dishwasher is still dead) and perhaps getting out on the bike to get the heart rate up a bit.

With this coming week involving the July 4th holiday, it will hopefully be fairly quiet (both with work and with evening activities).  Ben is at the beach with his girlfriend’s family until Thursday so the house will be a little emptier that normal but I guess we should get used to that.  Before long that will be the norm. Yes, orientation really started to solidify what is happening.