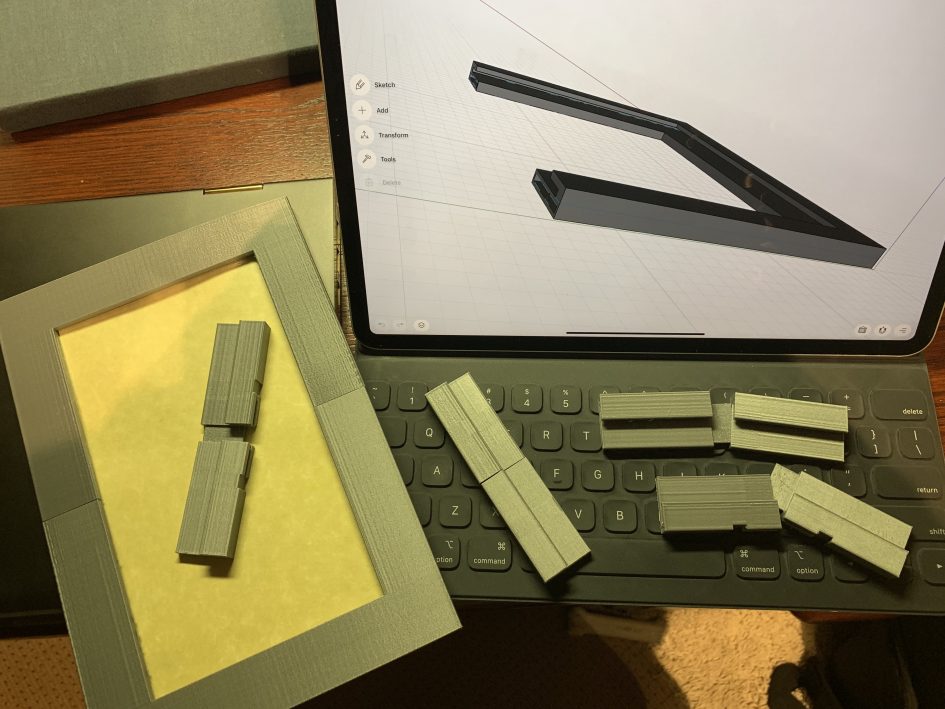 For Christmas we got our future engineering student a 3D printer.  He will tell you (and I guess that I am forced to admit) that the gift wasn’t really for him.  While the intention was to help him explore his creative side, I have been using it much more than him.  But he has a girlfriend. He is busy.

The idea of the 3D printer started when he was writing one of his college essays.  The topic was to think of a project you would build to help family members. We tossed around some ideas and he landed on a concept to make a portable ramp that was segmented and could be placed on the outside edges of steps.  With the ramp in place, a cart with wheels spaced to the ramp width could be used to more easily raise and lower items up and down stairs. For his grandmother who has her laundry machines in the basement, it would be very helpful.

The 3D printer was going to be a way for him to build a prototype.  But, that build never came. What he has built is a 3D model of his girlfriend’s cat who passed away.  And, for his physics project, a boat that I have documented very extensively on the blog. Otherwise, his interest in the 3D printer has been minimal.

A project that I have been toying with for several months during my free time is a picture frame.  A frame for a 5.5 X 8.5 document. Seems simple, right? Well, the issue is our printer won’t print an 8.5 span so I have to print the frame in two parts (at one point I thought it was going to be 4 parts but I found going diagonal on the print bed to work for the 5.5 span).  And to make it a little more complex, I wanted it to keep the two halves together without glue. I’ve tried various ways to clip it or put in a backing but ended up with slots on the frame that I can put an insert into and given the insert is tight enough, it seems to hold together.

The process has been interesting with many prototypes of small pieces of the frame and various clips or inserts to see what works.  Initially the hardest part was getting the frame the right size. I had to consider the size of what I was framing, plus a little wiggle room and then the thickness of the frame.  Planning and design were essential.

Luckily I found Shapr3D – a 3D modeling program for the iPad Pro.  It has been a godsend. I was using Sketchup and tried Autodesk Fusion 360 but Sketchup was tough to move the model around and not always easy to extrude or intrude (if that is a term – to make a cavity in something) and my patience grew thin.  Fusion 360 was awesome but I had a lot to learn and not enough time to make it my hobby. Shapr3D was easy to learn and is really easy to use. I love it.

As I write this I am printing what I hope it the final draft of the frame (well, half the frame).  If this works I can move onto the next part of the project – a stand for the frame and some extras.  More on that as it evolves. But I am sure Ben is going to say that he would like to use his 3D printer sometime but I always have it tied up.  Guess I will have to relent if that happens.