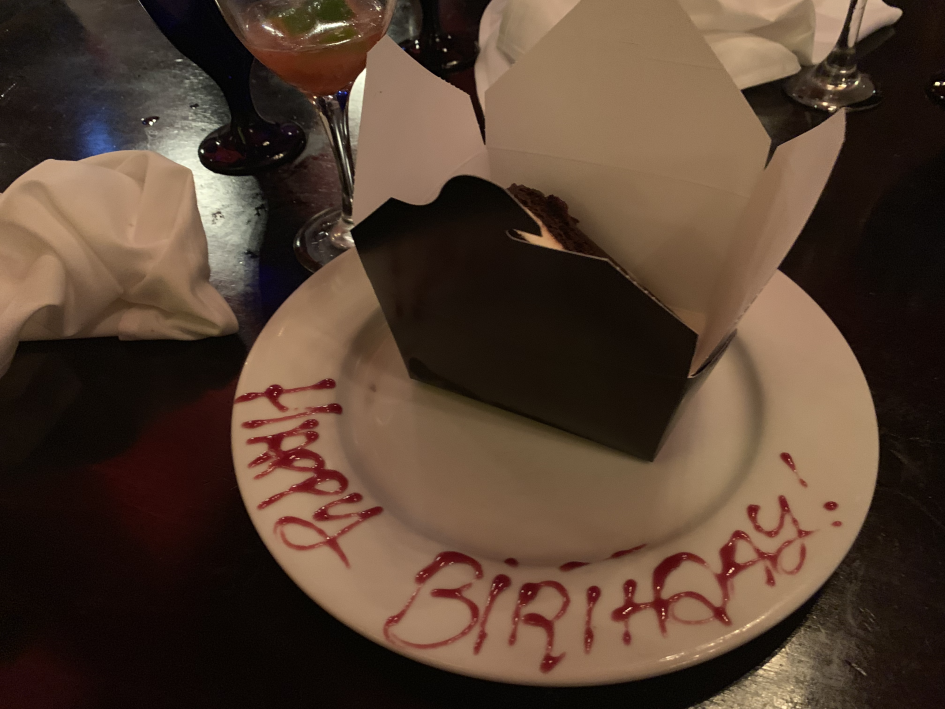 Missed a post yesterday.  It was my youngest son’s birthday so keeping with tradition, we took him and a few friends to Texas de Brazil.  The all you can eat Brazilian steakhouse has to see us coming and scramble to lock the doors. A group of teenage boys are able to eat their money’s worth.  They make up for the petite ladies who only get a salad a single helping of steak.

The meet selection I found most tasty last night was the lamb sirloin.  It was salty and sweet (and came fairly fresh to our table so still very warm).  Not that there were bad selections but this one was particularly good. The filet and beef sirloin were great.  The shrimp were good. I skipped the ribs (both beef and pork) but the boys who had them went for seconds (or thirds, you lose track easily).

One of the boys who had not been with us for previous trips took a Brazillian sausage.  Once the waiter left the table the other boys picked on him. Our running joke is the sausage guy is the new guy because the sausages are rejected a lot.  Usually my wife takes pity on them and takes one but she was unable to join us (prior to leaving for Beach Week, our oldest passed along his cold to her).

The wait staff was great, as usual.  Our two waitresses (one who appeared to be in training) were attentive and seemed impressed by our group.  The boys were well behaved. It always seems after the first several pounds of meat are consumed, the servers come by less even though our Red/Green indicators are still turned green (for “Feed Me”).  It is probably more a case of eating them out of what was prepared and they have to wait until they cook more.

After the beef bonanza, the boys wanted ice cream so we walked (or waddled) over to Cold Stone.  I passed on dessert, the last portion of Lamb Sirloin filled the last open inch of my insides. But all the boys consumed at least small ice cream.

Finally we went into Dick’s sporting goods.  They wanted to just look around, which meant go to each section and play with stuff.  Soccer, basketball, lacrosse, volleyball – they went around and tossed balls, played with sticks, made teenage boy jokes.  Eventually I had to tear them away – they would have stayed all night.

As we walked to the car they commented on how great it was to go into the sporting good store and not buy anything, just mess with stuff.  I thought back to when I was their age. We spent a lot of time at the mall but rarely spent any money. We just roamed the mall, talked to friends who were also roaming the mall, and eventually left to go… roam some other mall.