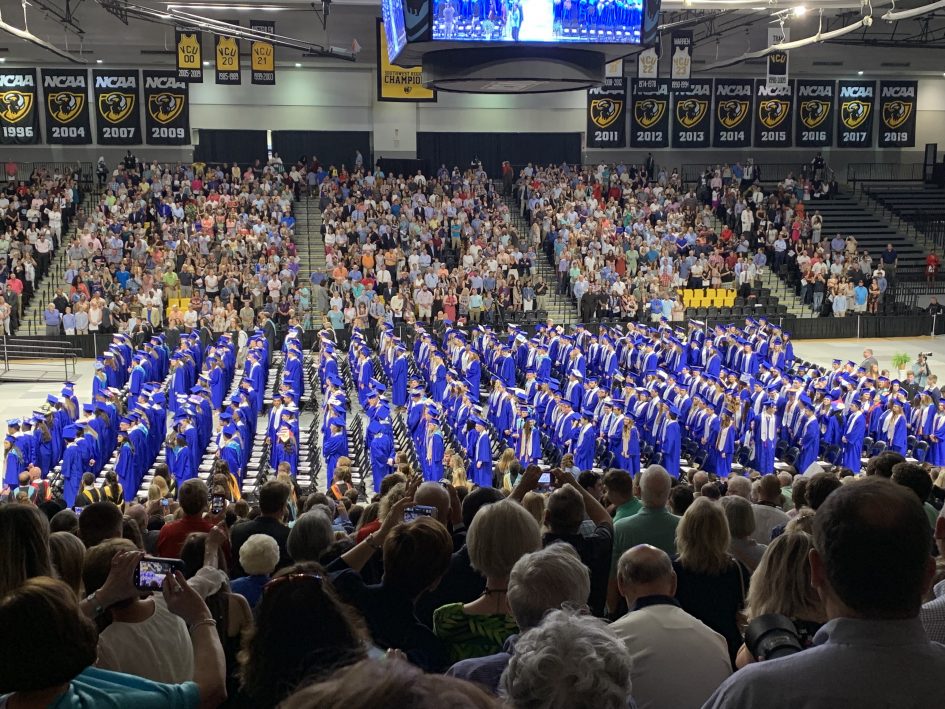 Today our oldest walked across the stage and received his diploma.  He is a high school graduate and ready to grow and mature as he steps up to the next level.  Next stop, James Madison University and four years of learning how to learn and how to be an independent adult.

Today carried a fair amount of emotion.  Pride for what he has accomplished. Joy for him taking it all in and showing signs of accomplishment, relief and some realization of freedom.  At least for me, a little remorse – as a parent you get used to having them in high school – the way the program works and who their teachers are.  Going to college will be a big change for him and for us. But an exciting change.

The graduation program was well orchestrated.  The school AD did a great job running through the 400+ names and they kept things moving.  The addresses by the Senior President, the Valedictorian and Salutatorian provided a great balance of light heartedness and thoughts toward the future.

It was nice to have family in attendance and back at the house afterwards.  We all went out to dinner and to commemorate the day, we gave everyone their own piece of JMU gear after dinner.  I’ve been told to embrace the purple and getting on board with that.

I reflect on how ready Ben is for the world.  Did we do enough to prepare him for what he will need?  He isn’t great at budgeting yet – if he has it he spends it.  But I was probably a lot like that at his age too. The main difference is I had a job and paid my own way for most of my daily expenses.  He’ll learn but how hard of a lesson is that going to be?

He has the ability to be independent.  He has shown signs of spreading his wings a bit and I have confidence he can approach most more mature situations with logic and thoughtfulness.  Tomorrow morning he heads off with friends for Beach Week. This may be the first test of his ability to steer clear of doing anything stupid.

So we will go from a busy day of graduation activities straight into a test of adulthood (and a partial empty nest for us).  It will be the next phase of parenting with more change coming very soon. While there is some relief that we have achieved this major milestone, the restful period is only temporary.