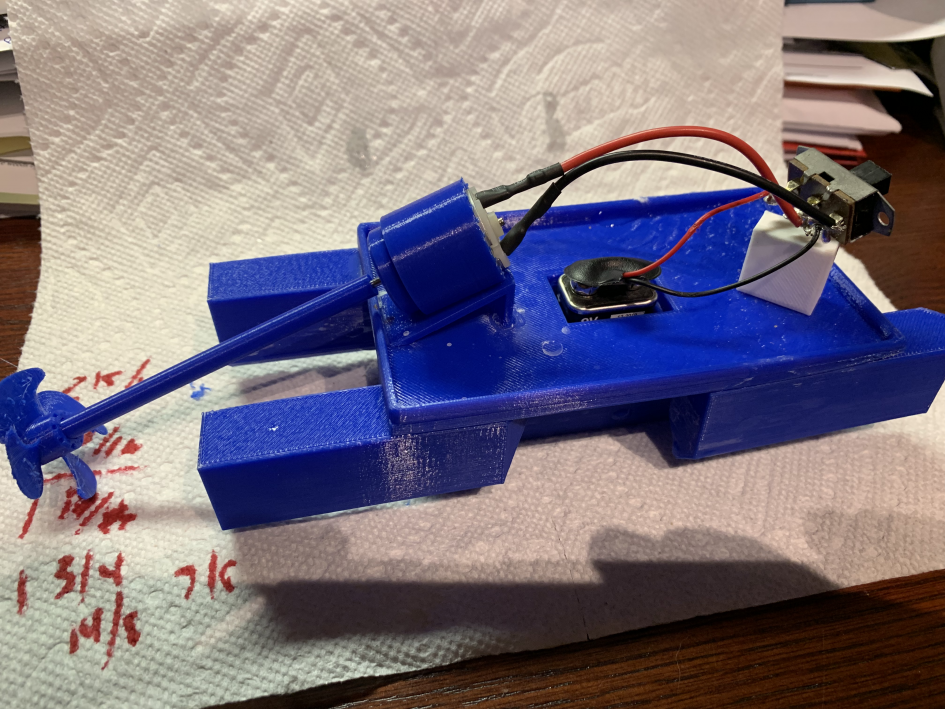 I think we should call this boat the SS Hope. It has been quite a lesson in, well, physics I guess (since that is the class). And hopefully a couple lessons in time management although I don’t know that any of that has sunk in yet (pardon the pun).

The boat (now more of a pontoon support raft) floats. It is actually fairly stable with Ben’s “battery in the pontoon” approach applied. Tonight he mounted the motor and we filled up the requisite 6cm of water in the tub and turned it on.

At first where was nothing. Nothing at all. Flick the switch a few times and still nothing. Did we drown the motor one too many times? Try another battery. Ah, power!!

So we set it afloat and turned it on. And… it went backwards. The prop is making it go backwards. Is the prop on backwards? No, it goes the same either way. Another lesson in physics – look at the direction of the blades on the prop and figure out which way it is going to go.

So the scramble has been to find a prop with the blades properly angled (we found one) and fire up the printer again. That is printing now, at 10:15 PM, for a project due tomorrow. Guess he really is ready for college. We may pull an all-nighter!!

It was fun to see Ben’s reaction when it came together tonight and we had everything on the boat and it was still afloat. He was very proud of his creation and showed it off to his mom. I hope she remembers that when we wake her up with a test run in the tub at midnight!!