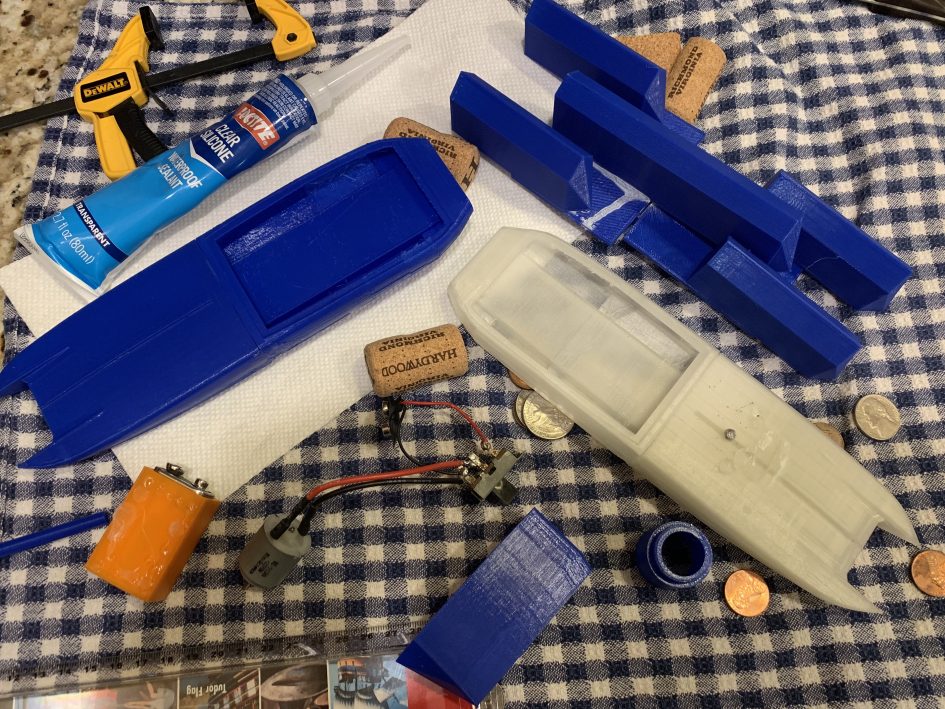 If at first you don't succeed, print, print and print again!!

Typically the three P’s of a school project are Patience, Persistence and Perseverance.  Our soon to be off to college son has a Physics project. Sounded easy enough, make a boat with a motor to traverse a couple yards of water.  Our three P’s have been Print, Print and Print again!

The 3D printer has been getting a workout.  The project started with “can we print the Titanic?”  We did and after a couple days it was returned with “it is too narrow”.  So, after asking for a little more detail I was told about adding the motor (and a battery and a switch).  We searched for a few more suitable design and found a speed boat pattern that seemed like it would be more stable and provide a place for all the “extras”.

The model we chose was actually designed to be a couple feet long.  The files were broken up into various parts of the boat to be printed and assembled.  But there was one full file we were able to print out and then size how we wanted it. We set the size so we could print it in two parts (our printer only prints about 140mm wide) and then glued them together.

This seemed to be working well until my son took it back to school and added the weight of the battery.  The SS Daddycast started taking on water. Additionally, the prop we printed was pushing in the wrong direction (pulling actually).  We had some work to do.

We decided to add some pontoons and discussed design.  This is when my son revealed that we had width and length restrictions.  While it would have been ideal to add nice wide pontoons to the outside to increase stability while keeping the height down, this was not an option.  We didn’t have too much room to play with. So, we decided to go with building a platform on top of smaller pontoons (so they would mostly submerge) and then putting the current boat on top of it.

Printing these items because a mess.  While printing off a sample pontoon worked well, when trying to print off two attached to a cross member, the slicing of the file in the software completely botched the angled front of the pontoons.  It basically stripped away panels and for the first couple tries, we didn’t catch it until it was too late. Eventually we were able to print out pontoons two at a time and then glue them to the crossmember/platform.  With four pontoons supporting the platform we mounted the boat and it seemed to float. We added the battery and motor and it… capsized.

The results were too tall, too unstable, too easily unbalanced.  So we went back to the drawing board and decided to abandon the original speed boat design and go more with a pontoon boat option.  My son’s genius idea was to set the battery down into a center pontoon so the weight of it would help anchor the boat. We had a plan.

While we had been printing over the weekend, I began to familiarize myself with Shapr3D, an iPad app for 3D modeling.  Previously I had been using SketchUp but found it hard to maneuver. With the touch screen of Shapr3D I was able to manipulate the view of what I was working on to spin it around, move the view top or bottom easily and it seems to have all the right tools without the complexity.

Our new build involved the 4 pontoons for the four corners of the platform and a center pontoon with space for the battery carved out of the middle.  The platform has a rectangle cut out of the middle that lines up with the battery protruding from the center pontoon. In Shapr3D we also designed a motor sleeve (tube with a tapered end) that is merged into an angled stand so our prop can be angled into the water from the pontoon supported platform.

The center pontoon is printing as I am writing this.  It has about an hour left and then (if we are still awake) we can combine it with the platform and four corner pontoons that were glued together a little while ago.  Then tomorrow night we mount the motor and check the length of the prop rod (we my have to print a longer one). And (very important), make sure our prop runs in the right direction.  Then we should be sailing (or boating), assuming all goes well. I am thinking tomorrow night might be another late one.