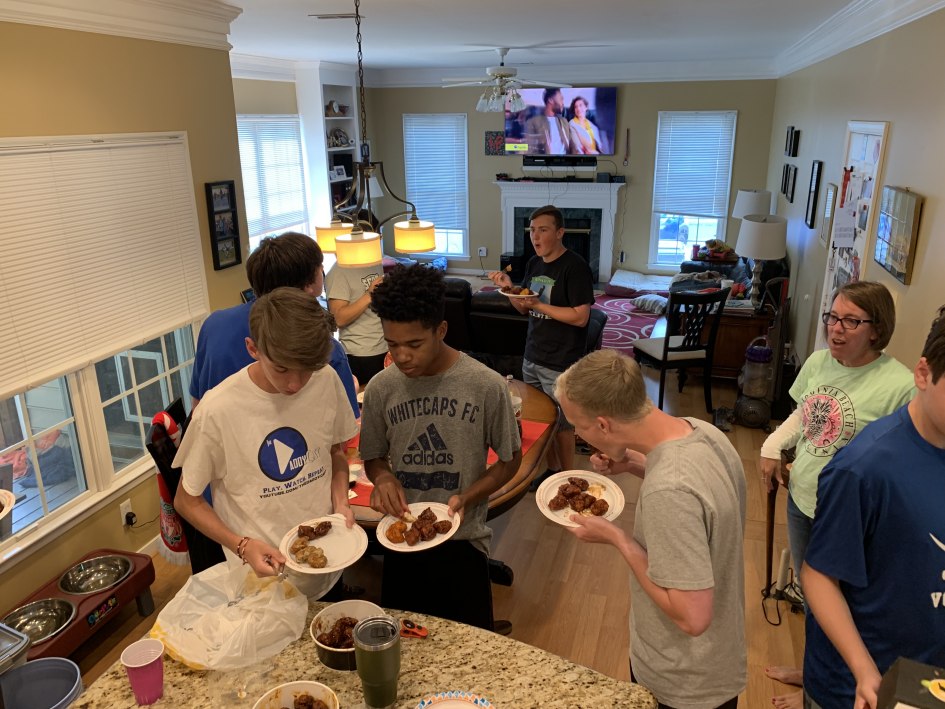 I think there is a stereotype of “that house”- the house amongst friends that becomes the hangout house.  Growing up i would go over to my friends’ house a lot because there were 3 brothers that I hung out with. We would all occasionally go over to another kids’ house across the street but typically Kevin, Mark and Sean’s house was where we hung out.  Of course back then we were outside most of the time because there wasn’t as much to do inside. So it was more hanging out in their yard.

For my youngest, we have become the house, or more correctly one of the houses.  For a while, his friend’s house was “the house”. We were constantly dropping him off over there and he was spending the night.  Even though he would come home the next morning with his eyes nearly swollen shut from cat allergies, that is where they all hung out and he loved it. Still does.

A couple years ago things started to swing toward our house a little more.  Especially as his friends started to drive (and he did not – he was pretty late having a desire to get his learners), they would drive over and the cul de sac would fill up with cars.  They would watch soccer, play soccer in the front yard or walk over and play basketball at the neighborhood clubhouse.

The boys also claimed our WiFi was really good and they would bring over their game consoles and monitors and setup a LAN party (with other friends joining from their homes) that would go on until late at night.  In the morning I would find boys strewn about the downstairs and monitors, extension cords and gaming controller spread out between the kitchen and family room. Not complaining – we have always been more than willing to open our house for them and make sure everyone was safe. They are a good group of kids.

For the past few weeks the boys have been talking about going to a river house.  The mom of one of the boys bought a house on the river a year or so ago and they were all going to get away after SAT testing this morning.  But, many realized they were behind on a year end assignment and they decided to stay home to work on that – but the purpose of their get together was to watch soccer (the Champions League finals) so my youngest confirmed last night that they would be coming to our house to watch.

Luckily the group is pretty easy to please.  There was a split between pizza or wings so I trumped the decision and purchased about $120 worth of wings from Buffalo Wild Wings.  When I walked in and set down the bags of wings, they pounced. It was like a swarm of vultures on fresh meat. My son first remarked that I got too much but in the end, we didn’t have more than a half dozen boneless wings for leftovers.

After the soccer game was over, they headed over to the basketball courts and then came back to make sure our kitchen smelled like a locker room instead of hot wings.  Then they dispersed and met up at the Richmond Kickers game later in the evening. Seems like they had a good time and another day of fun to which we could help contribute.