Memorial Day weekend marked the end of the Spring sports season.  Notably, the end of club volleyball for both boys. The end was memorialized with 3 full days of the Boys’ East Coast Championships.  Our youngest son’s team played a morning schedule and our oldest’s played the afternoon. Aside from a midday trip home to switch boys, we were at the tournament from 7:30 AM until close to 9 PM the first two days.  The final day, Monday, Memorial Day, we had to be there around 10 and were done around 4 – a short day that ended with our oldest coming home with some hardware (his team won a consolation bracket). 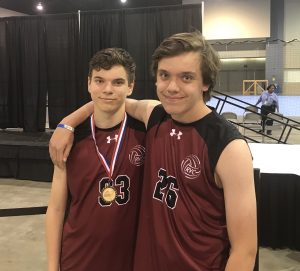 The Spring season has kept us busy.  With our youngest playing high school soccer and both boys having two volleyball practices a week (and tournaments at least every other weekend in Richmond or Virginia Beach), we seemed to always be going from or to an event.  And usually with smelly kids, backpacks and sometimes even a little smelly ourselves.

In regards to being the Sports Parent Videographer, the schedule was a bit demanding at times.  For high school soccer I not only recorded the JV squad to catch our youngest and his teammates but also stuck around to capture the Varsity team (except for a couple times when I was out of town).  Some weekends both boys’ teams played and I ended up with twice the editing workload (see my posts about shooting two matches at once – “Doubling Up”). I am still digging out from the Memorial Day tournament (I kind of ran out of steam and have been taking my time to pick up the slack – not to mention that work has been a bit demanding recently).

So the thought of having a little time without kids sports was appealing.  It would give us time to catch up on other things and perhaps even find the bottom of the laundry pile.  Perhaps take up a hobby (yeah, right) or read a book (or listen to one while playing Candy Crush). But a great example of reality is last Friday night.  Our oldest was out with friends and our youngest was home with us, with nothing to do. He became so bored and antsy that he finally went out to run a couple miles just to do something.  I knew this hiatus wouldn’t last.

It was actually evident before that.  Our youngest and his best friend pulled together an indoor soccer team for a Summer league.  They were recruiting players and getting everyone signed up for a 6 week season that starts up in July and runs until the Fall season practices start.  So our hiatus was shortened to about 4 weeks, one of which we would be on vacation. But it was one event a week – on the weekend. Not too bad.

Then my oldest informed me that several of his friends (who play on the high school varsity soccer team) were getting a team together to play adult outdoor.  My oldest (not a soccer player in the past decade) and several of his non-soccer friends were going to manage and coach the team. And, the offer came to my youngest to join them so suddenly were were up to two days a week for soccer games.  At least we have a volleyball hiatus until high school practices start August 1st.

I am sure during this downtime we will get bored.  You tend to get into a rhythm with the various events and being everywhere.  It also creates good excuses for avoiding things I like less, like yard work for example.  Plus I do get real enjoyment watching my kids play sports. So we will miss if for the short while we are “off”.

As I type this my youngest is rebounding the small soccer ball against my chair.  Guess someone needs to go out. They are like puppies sometimes. One thing I hope this hiatus allows is for me to get caught up on blogging.  I intend to keep you informed of how our Summer is going and catch up on topics I have in my backlog. With a trip to Park City, Utah planned, we should have a few interesting adventures to share.