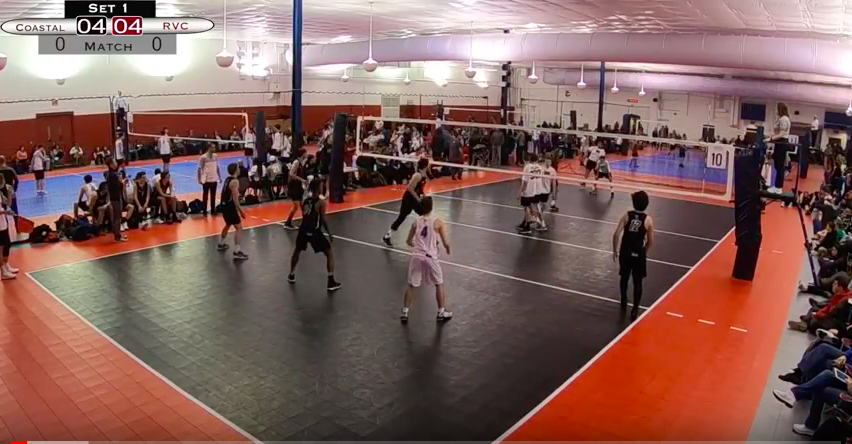 We really lucked out at the first tournament where both boys’ teams were playing.  The boys ended up playing on courts next to each other and add to that, the courts were along the back wall of RVC (Richmond Volleyball Club).  With that, we got there early enough to get a spot along the wall where we could watch both courts.  A perfect spot.

Originally the schedule was perfect too.  After the first match (where both boys’ teams were playing) the stagger was supposed to be stagger so that we could see both play.  One played while the other worked or sat.  But, once we got there we found that my youngest’s group had a team drop out so their schedule shifted to create some conflict.  It was time to enact the “GoPro on a  Pole” option. 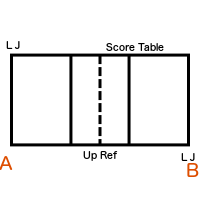 My experience with recording volleyball has led me to believe the best spot to record from is away from a Line Judge (LJ) and opposite the scoring table (Position A).  Typically the teams sit in line with the scoring table and coaches tend to walk around so If you line up on a corner with the benches you tend to get a lot of the back of a coach’s head.  If you can’t get to Position A, Position B works, you just need to deal with the Line Judge (which can be achieved by getting your camera above the Line Judge – but volleyball players aren’t typically short and even if they have a short one on the team, he is NOT guaranteed to be the line judge!!).

With the boys on courts next to each other, we were setup for Position A on one court and Position B on the other 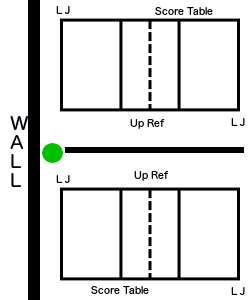 (Green Dot).  Tournaments are traditionally very crowded.  It was impossible to achieve keeping the space to ourselves.  While we setup to reserve our space with chairs and my big video backpack, we still had to work around other parents, other camera setups (a couple dads setting up GoPro’s on a tripod) and a few wandering teenagers (mainly girlfriends), although being against the back wall, the wandering was kept to a minimum.

In our position against the wall I was able maintain a two camera setup: my main camera on my Manfrotto tripod and the lighting mount (a tripod with a 10 foot extension) with the GoPro mounted on it to record two games at once.  I was able to manage the GoPro with my iPhone app and man the main camera myself.  This worked pretty well.  After the first round of double filming got a little fiesty and added a second camera to the the pole holding the GoPro to zoom in on the net.  I was able to toggle between the views in editing with a decent level of success (the lighting and color saturation was off – I could have worked it more in Final Cut but decided it was close enough for this audience).

The second minor issue was with the timing- more of a personal issue wanting to have my primary setup in two places at once.  I love my tripod for the main camera.  More, I love the video head on the tripod – it makes for smooth panning and with the handle remote I am accustomed to the one hand operation.  But the tripod is big and heavy and takes space.  During the day there were a couple of times that I wanted to move the main camera over to the other side of our area to record the other court (the main camera does such a good job – the quality is great) but I was reluctant because of the footprint of the tripod and trying to squeeze in between other parents and cameras. 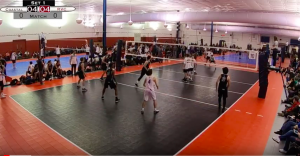 I’ve started to research resolutions to these two issues and come up with a few options.  I will share more in a future post.  I think I have resolved them both.  But for now, it seems the “GoPro on a Pole” option worked well.  I like the overhead angle and the quality of the GoPro 6 is good.  The color saturation is good (perhaps even better than the Canon R800 I used to shoot the zooms on the net – but to be fair, the lighting was different as the cameras were shooting from different angles) and the overhead gives a unique angle to watch the game.  Management of two cameras running at once will be an issue that may be near impossible if the courts aren’t next to each other but my better half seemed willing to help so hopefully we will be covered next time around.