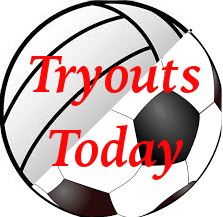 With the beginning of the school year has come fall sports tryouts.  We aren’t very good at staying uninvolved or uncaring around tryouts.  We get a little too emotionally attached to what our kids want.  I admit it- guilty as charged.  So going through the tryout and selection process isn’t easy for our household.  Thank goodness it doesn’t happen too often.

This year’s tryout angst started in August.  Our oldest was trying out for volleyball.  As an eighth grader, since they don’t offer volleyball at his Middle School, he was able to tryout for JV at the High School.  We have been thrilled that he was willing to attempt this – it really shows his maturity and willingness to break out of his comfort zone.  But with it comes the anxiety of what to do, will he make it, what if he doesn’t – how will he take it.  And so on.

Luckily for us he made the JV team and has been happily participating in practices 4-5 times a week since.  It has been a little struggle keeping up with the schedule and communication but between what he hears and what we gain from a steady email stream with the team mom, we make it work.  It is great to see him passionate about the game and to have his “thing” to do.  Plus he is making friends for next year’s transition to high school.

Last year my youngest tried out for the Middle School soccer team.  As a 6th grader and with over 50 kids trying out for 22 slots, his chances were slim.  He didn’t make it but was okay with that.  In Spring he went through the tryouts process for his club travel team as they merged from two teams to one – he made the cut and was thrilled to be playing with a lot of his friends for the coming year.  He worked hard over the Summer, doing weekly workouts with a training coach, attending pick-up games with kids who were on the Middle School team and attending a couple of camps.  He put in a lot of time to fulfill his goal of making the Middle School team and we supported that effort with our time and money as well.

Middle School tryouts came the first week of school and this year around 70 kids came out.  The coach maintains all previous players so he had 18 returning players who already had spots.  Even with an expanded roster, there weren’t many slots to fill.  With a little more than a one in 10 chance of making it, he did not.  He was a little upset but has been dealing with it well and still loves the game and playing with his club team.  He’ll try again next year.

It probably doesn’t help them when we get so attached to their success.  It adds to the pressure and while commiserating with them may be helpful to some degree, all of us wallowing in what we think should have been doesn’t change the past.  I realize we should be strong and perhaps in being strong we should be somewhat benevolent in seeming disenfranchised.  But that is easier said than done.  We want our kids to succeed and we are invested in the outcome of any endeavour they determine worthy of their effort.  We can just try to suppress our concern as best we can and hope they can deal with their parents during trying (or tryout) times.