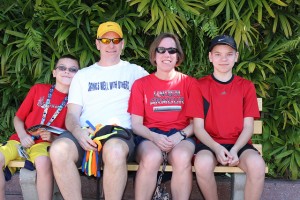 We aren’t fools.  We realize there will be many moments where we get the cold shoulder.  Where the boys are not into hanging out with their old, stupid parents.    We know the day will come where they want their independence and solitude.  But we do what we can to keep that from happening too soon and to make sure the impact of it, the depth of it, is as minimal as possible.

This afternoon my youngest came to me to see if he could stay home during his older brother’s volleyball tournament.  He noted that his older brother had stayed home for several of his soccer practices.  I considered it for a minute.  He did have some homework to catch up on (more on that in a minute) and he would have missed volleyball anyway if his soccer game had not been rained out.

I told him no, he had to go and support his brother.  I noted that his brother has attended a lot of soccer games and tournaments in the past couple of years, as well as two of his four Middle School musical performances in the past three days.  He said okay, didn’t even fight it a little, and attended in good spirits (although with his nose buried in a book most of the time.

This evening the shoe in many ways was on the other foot.  My youngest had a book report to complete (one that was late and therefore required him to put in more than the usual effort to make sure what goes in is his best, since it will be penalized for being late).  It seems his busy schedule of musical practice and soccer practice has set him back in his school work a tad.  As such, we needed to create an environment for him to focus.  That meant my oldest had to stop his video game play and also had to turn off the TV – nothing major and he didn’t really fight it but still, a sacrifice to be made for family harmony.

It is actually my wife who has set the rule that we all join in together for these types of things.  She grew up in a family that supported one another and went to each other’s events.  As an only child, I never had that type of situation to build from.  But is has worked well.  There is no fighting the suggestion we all go to soccer games an hour or two away.  We try to accommodate everyone’s wants to meals and things to break up any boredom (ala the ipad or a book) but we are used to doing things together and so far, even the teenage years haven’t caused that to change.

Doing these types of things together, whether it is attending sports events or daily meals, is essential to keeping up the communication between us.  Communication is key to knowing what they are doing, what they are going through, what they are thinking.  Knowing those things helps us guide, direct, react and understand.  And how GI Joe used to say, Knowing is half the battle!!