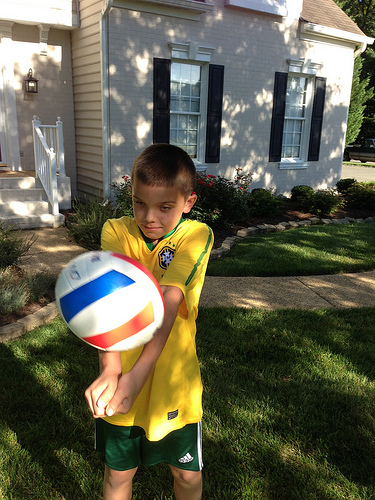 I have been playing volleyball for the past 20 years (off and on, when the boys were born I took a hiatus for several years). Although I didn’t play in high school or college, I have really grown to appreciate the game. So with my love of the game, I have tried to convince the boys to take up the sport as well.

Most of my attempts have been short in duration. Basically, I toss the ball to them after showing some basic form for bumping and they hit the ball then complain about how much it hurts their arms. After a dozen or so attempts, they continue to complain and whine about stopping. After a few minutes of the whining, I get tired of it and we stop. I know there is a fine line between pushing them to like it and causing them to hate it.

So, when a flyer came home about a volleyball camp I was curious. It was only 3 days and only 2 hours a day. Perhaps if they were away from me they would whine less and give it a try. I mentioned it to them and got a negative response, as I expected.

We sat on the idea for a while. I mentioned it to them several times with the expectation that they would go – they moaned. I pushed it just a little more to egg them on, and realized they were accepting it more than I thought.

The week before camp I talked to one of the guys I play volleyball with who also coaches at the high school where the camp was being held. He said he was going to be one of the coaches for the camp and I told him to look out for my boys. He confirmed we could commit up to the first day of camp so we had some time to work with.

Much to my surprise, the boys loved the camp. they had a great time the first day, made some new friends and saw some others they already knew. The second day was more of the same, fun learning the basics and they even wanted to bump the ball around in the backyard to show me what they learned. They enjoyed all three days and may even take an interest in the sport.

So the moral of this story is to feel free to push your kids a little. Sure, you don’t want to push them too much, you don’t want to make then dislike something because they were forced to do it. But, they might surprise themselves with what they like and trying something new. They might just need that little nudge to give it a try. It may not work with veggies but it probably applies to almost everything else.