Pride in (their) Achievment

Friday I was in a great mood.  I could hardly wipe the smile off my face.  Hardly anything could bring me down.  The reason: my youngest made the team.  He had a tryout with a new Travel soccer  team and he made it.  I was happy, he was happy, our whole family up through grandparents was happy.  And we anticipate this happiness will continue.  It is amazing how much we can be happy for his achievement.  It may seem overstated but with a little  background, you may understand why. 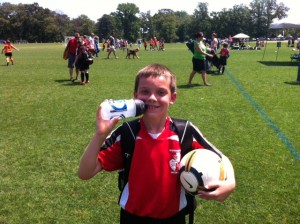 A month or so ago my youngest informed us that he had a goal.  He wanted to play for the middle school soccer team – a “looking ahead” goal since he won’t start middle school until next year.  We promised him we would do whatever we could to help him with that goal, and then began thinking of ways to fulfill that promise.

His situation presented some difficulties.  He had been a part of a team that was “rebuilding” last season.  They were a team where about half of the kids had played together last year and the others were new.  They started the year in a division where they were outgunned and the first few games were painful.  They abandoned that division and filled the rest of the Fall season with games against teams in the area that were trying to make the transition from Recreation league to Travel league play.  The games were much more competitive (well, even) but the number of teams available at this level were few.  We were able to limp through the Fall season with the kids still in good spirits.

After a tough indoor season over the Winter, and several players on their already slim roster not returning for the Spring, it was decided that the team would fold into the next age group and become one of those transition teams, basically becoming a Rec team that could rebuild (there’s that word again) and become Travel again at some point in the future.  This, added to the fact that the club itself is still maturing and as you can imagine with any new organization, even though the passions was there, the organizational aspects were not always, led us to think about options.

There were a couple of things working against us.  We were mid-season and most clubs don’t like to make mid-season changes.  Also many of the good teams have a full roster and have been playing together for years- we were coming late to the table.  But with a couple of emails and phone calls I was able to arrange a couple of tryouts.  We had to help him be able to do his best for his goal.

One of the compelling things that inspired us from Winter indoor season was when a couple of other players (a pair of brothers that we have known for a while, and who have been through several soccer development programs over the past few years) came to play as subs for his indoor team.  You could easily tell that their skill level was beyond anything we had on our team but you could also see several of our players pick up on the way they were playing (positioning and hussle) and that was encouraging.  That was one of the instances that pushed us to find a way for him to experience that on a regular basis- to be around other players that might be better and to learn from that.

So, with all that driving us, perhaps you can understand our happiness with him making this new team.  He is thrilled.  He knows a couple of the players on his new team- they are all excited to play together.  He likes the coaches and the drills they did during his first practice.  It is a wonderful situation.  Perhaps that only one more thrilled is my wife, who was manager of his previous team.  She will get to watch him play and not have to worry about the elements and duties to help run the team.

Most of all, we are proud of his achievement.  We are proud of how he succeeded with performing well for the tryouts and made the team.  He did it, no one helped him.  But we can all join in on the joy and pride of his accomplishment.