The power of closeness

This past weekend our family participated in Pedal Power, an event held by Energy Cycle to promote the organization’s message for energy conservation awareness.  It is the second year in a row that a majority of the family has participated in pedaling to generate energy.  The setup includes bicycle trainers outfitted with generators with the generator plugged into a central circuit board that converts the energy to charge batteries that then power electrical items at the event (most importantly the waffle irons). 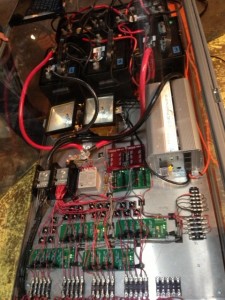 Aside from the awareness that it takes a lot of energy (sweat energy in this case) to cook a waffle, there is also a competition involved.  As the power passes through the circuit board, it is registered and presented by a software program that lists the wattage being generated by bike and ranks the riders based on that wattage (also taking other factors like the riders weight into account).  This competitive piece is what brings out the 20 teams of two to compete!

I also helped a couple of weeks ago to test the equipment.  During that time I learned a little about the engineering of the setup.  With a couple of other testers armed with wattage meters on their bikes, we found that the watts being measured through the software were about half of what their personal wattage meters were registering.  This was explained by the fact that some of the power is lost along the wire.  This fact popped into my head when I noticed a couple of the trainers closer to the circuit board, thus with a shorter wire, seemed to be producing more wattage.

Now all out relationships need a wire, need some distance, we can’t pedal our trainer on the circuit board.  But the shorter the wire, the less the loss of power across the wire and the more power actually makes it through.  We all have busy lives, have things we want to do, we need to get done, jobs, chores, etc.  But, if in spite of all that we still fight to keep that closeness, that involvement, it will pay off with increased power.  It will create a more powerful relationship.

Just like in Pedal Power, the energy isn’t generated without work.  Luckily we only pedaled for 30 minutes sessions.  But that sweat made the numbers move on the projected wattage, it made a difference and the work involved in being close and connected to your kids will pay off too, you will see the difference.  Obviously this work takes a lifetime, not just 30 minutes, but the rewards are also better than a waffle (even though the waffles really hit the spot).