Since our dog passed away a few years ago, the boys have periodically asked for a pet.  My wife and I have avoided the request as much as possible, knowing that we would both love to have another dog but don’t feel our schedules allow for a fair (and reliable) environment for a dog.  So, we have put the boys off and luckily they haven’t pressed too hard. 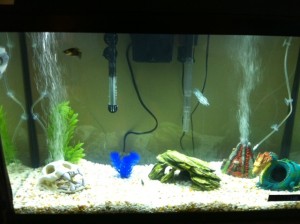 This Summer, as part of exploring their independence and the responsibility that comes with age, we caved a bit and agreed to start the pet cycle with fish.  We used the standard “if you can keep a fish alive, then we can move on to something better” parenting approach (at least I recall that from my mother – with her knowing full well that the goldfish won at the Fall Fair would be lucky to last a week).  We came to terms with the boys, scheduling our days of taking care of fish to begin once they returned from a week away at camp (read “Empty Tank Syndrome” for a little more on this).

We started with some Mollies, basic and easy fish, to get the tank started.  My goal was to progress to puffer fish and some sharks.  When I got out of college, feeling a bit pet deprived from my childhood (aside from the annual fair goldfish), I started a tank and maintained a couple of puffers and sharks for a while (quite an accomplishment for a 22 year old living with other 22 year olds in an appartment that looked like, well, a few 22 year olds lived there).  So, still feeling that the mix of puffers and sharks provided some great entertainment, I wanted to get back to that point but we had to wait for the tank to be ready.

After a couple of weeks letting the mollies live in the tank, we were finally approved by the local fish store to get a puffer based on our water test and outlasting their repeated advise that the puffer would likely nibble on the other fish.  This later part made my youngest nervous.  He had grown attached to the mollies and balked at getting the puffer due to the possible nibble risk.  After some convincing though (over the course of a couple of days) he got on board with the puffer, probably after seeing the anxiousness in my oldest and myself after such a long wait to prep the tank.

Once we got the puffer in the tank we realized that the other fish were not in any danger, quite the contrary.  The mollies seemed to push the puffer around as he tried to get used to the tank and left him hiding in a corner for most of the first day.  Eventually he got a little better about avoiding them, explored the rest of the tank and moved about pretty normally.  He was not a fan of the fish flakes but the fish store had warned of this so we fed him krill, which really peaked his appetite.  The only problem is that I had no idea how much krill to put in the tank and ultimately ended up overfeeding the fish (the others like the krill too), producing water quality issues that ultimately led to the puffer (whom we named Stanley) getting sick.  Once we realized he was not doing well I did an emergency water change but it was too late, Stanley didn’t make it.

The boys were saddened, not terribly but enough that you could see they were upset.  I too was a bit bummed that Stanley had met his demise at our hands (and felt a bit inadequate knowing that we had seen him at the pet store for weeks perfectly happy in their tank, only to bring him to ours and eventually killing him).  But I did realize in talking to the boys that this had been a valuable learning experience, in a very short time.

First, they learned about working and waiting- the investment we all put into getting the tank ready for Stanley.  We had worked hard to setup the tank, take our water samples in for testing and waiting until we were ready.  They also learned of the financial investment as they knew we had to pay for the fish (even though Stanley wasn’t too expensive, overall we have a decent financial investment in the pet fish project).  They have been learning (and will continue to) about responsibility, being the primary ones in charge of feeding the fish and eventually for cleaning and carrying for the tank.

They also learned a little about loss, again, not too terribly shaken but a step that will help them deal better with larger losses and traumatic events.  The loss of a pet takes its toll the longer we have to bond and connect with that pet.  Since Stanley was only with us a week (yes, it only took that long to fail the poor guy and poison him via the poor water quality of the tank), they didn’t develop a strong bond but as we move onto other fish, that bond building will happen and prepare them more for a loss such as a dog or the unfortunate event of losing a human friend or family member.

So, even though the loss of Stanley is tragic, to some small degree relative to the world’s problems, it is probably the best lesson I could hope to teach the boys for less than $10.  I think there is value in having pets around, both in how you can learn from experiences (and hopefully not all of them ending this way) but also in companionship and as mentioned, responsibility.  So we press on with the remaining mollies (who seem fairly resilient thus far) and with further lessons, and perhaps future fish tales.