Innocence (not lost on me) 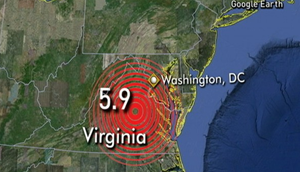 A couple of weeks Central Virginia experienced an earthquake.  5.9 – not sure how that rates but it sounds big – closer to 10 than 0.  The media played it up, saying Californians are saying “welcome to the club” and other various challenges to the East Coast.  I imagine that is just the media but if some West Coasters feel that way, fine.  Come have a hurricane or two on us.

The epicenter of the quake was about 40 miles from home.  I was in St Louis on business and missed the whole thing.  Based on calls home, everyone was safe and everything was fine.  Based on the news, Washington DC and New York were the focal points, not Central VA.  After knowing my family and our house were safe, I felt better about being away but still wish I had been home to experience the quake as well as support those around me.

Once I had a chance to talk to the boys about it (they were asleep when I got home, although my youngest, while walking him to his bed, said “Hello Daddy.  How was St Louis?”), they noted that yes, they were aware of the earthquake.  They said at camp, the adults were all in the hallway “freaking out” but the kids were calm and curious as to what was going on.  Their description of the situation paints a pretty realistic picture – one where the more knowledgeable adults had concerns that the innocence of children failed to realize.

It made me think how nice it is to be unaware sometimes, to not know what to worry about and therefore, to not worry.  Recently I heard the song “Everybody’s Free (to wear Sunscreen)” for the first time in a long time- you remember, the commencement address with various thought provoking tidbits.  Part of that states that worrying is as effective as trying to solve an algebra equation by chewing bubblegum.  I guess if you think better chewing, that might work, but I get the idea.  And appreciate it.

How much time do we spend worrying?  How much effort do we spend avoiding something due to worry?  What are the outcomes of this worry?  Do we deprive our kids of any experiences because of the worry?

I would probably have to answer yes to the last one.  Looking over our approach to parenting, we probably lean toward the over protective.  We are the worried adults in the hallway.  We are the parents who deny our kids free reign of the neighborhood on their bikes and feet to go and do as they please.  Is that wrong?  And when do we switch?  When do we allow more freedom?

This is a question that has been running through my head lately.  Is it time, now that my oldest is almost 11, to ease up the protection a bit?  Is it time to allow him to experience more freedom?  Granted, this Summer has been a time to explore freedom.  With the Summer of Camps, the boys have branched out to new places, done new things, met new friends and even spent a week away from home (and away from the TV and video games, which probably ranked higher than missing Mom and Dad).  It has been a very liberating 3 months for them.  And it is time to continue that?

I think finding gauging that from their reactions is where we will land.  Seeing how they respond based on the freedoms they have been afforded this Summer.  If they quesiton our protective nature, if they feel deprived in any way, they will speak up (quiet it not something we worry about in the Love House).  They will let us know if they are ready to spread their wings in some area of their life where we are being too limiting.  And then we will assess our approach, determine if it is time to let go a little and let them explore more of the world around them.  We as parents typically want to keep them as kids as long as we can (I don’t want to even think about the challenges that lay before us as they become teenagers) but we know we can’t do that forever.  And I have a feeling we are nearing a turning point, whether we are ready for it or not.