It is easy to see a great degree of self-centeredness in modern society.  As we deal with the coming of age of the “Me” generation, propped up by years of self-esteem based education, we can easily find characters who can look no farther than their own needs.  Just last night I saw a high school age boy wearing a T-Shirt that stated “My Life, My World, My Game” (the game was volleyball, apropos for the volleyball club).  What about the next person who buys that shirt?  Isn’t it his world and his game too? 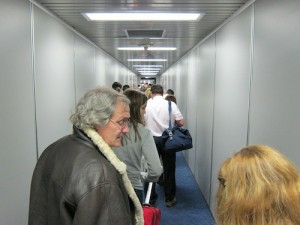 But this attitude of living with blinders on isn’t restricted to the youth.  Adults seem to be taking on more of a stereotypical New Yorker response to life as well.  People seem more apt to look the other way, avoid interaction and are less inclined to offer help or even a smile to a stranger.  There are many reasons behind this but that is a topic for another day.

Regardless of what we see around us, as parents we often want to make our kids better than the average person.  We want to educate them in being good, responsible citizens.  To be kind, helpful and available to others.  We put them through sports programs to ingrain attributes of teamwork and participation.  And we constantly fight the wave of societal pressure to make them just like everyone else.

Last week I saw a glimmer of hope in my environment.  It was, of all places, at the airport.  Airports have become a place of stress and discontent as travellers are treated like cattle beng rushed through security lines, experiencing planning mishaps as flights are delayed or cancelled and sharing all of this in an environment that is typically bland, overcrowded and in repair.  Our airports were not designed for the current state of security necessary to travel (ask about my experience at the Kansas City airport sometime).

But last week there was an event that was different.  As I stood in line with my co-worker and a few dozen other travellers waiting for our carry on luggage to be pulled from the plane, it happened.  It was ingenious and rewarding all at the same time.  And it became in inspirational story that I had to share with the boys, and of course you, the reader.

We were all lined up along the walls of the jet bridge waiting for the poor guy at the door to pull bags from the conveyor to be retrieved by their owners.  With over 30 people waiting for their luggage and the narrowness of the jet bridge, it was impossible to see what bags were waiting to be picked up for anyone more than 5 people back (another fault of the airport design for current use).  Realizing this, one of the guys in line shouted ‘Pass it back”.  Others repeated “Yeah, pass it back”.  And they did.  The people at the front of the line passed back bags as they came through the door and as they were relayed to their owners, those people left the line and opened up space for those further back.  It also kept the area near the door where the bags were being dumped to keep from stacking up.  After a few minutes, the number of people waiting for bags was small enough that everyone could see their bags and move up to get them without having to swim through others waiting.

Amazing about this is the spontaneity and the display of teamwork amongst total strangers.  Although it is not completely uncommon for a group of people in a similar plight to bond (and the airport and flying seems to be an ideal “plight” situation), this approach required effort and would be something you would expect to invoke a “Yeah, whatever” response.  But instead, everyone recognized the benefit of a group effort and participated, partly for their own good but primarily for the good of the group.

I told this story to the boys and, well, I’ll have to make them read this when they get a little older.  They understood the story but not all the excitement that I felt around this display of humanity.  It is obviously something that is more powerful experiencing over hearing about it but at the same time, I think they will understand more when they are more mature.

The parenting lesson in this is to share these types of experiences.  To tell our kids that there is hope, society can get along and work together.  Better yet to find a way to have them participate in something like this (if you can arrange something akin to a team building camp or experience) but those opportunities don’t come along every day.  So for now, sharing is the best we can do for most days while keeping our eyes out for some way to show and involve them in an activity that will impact them, perhaps for the rest of their lives.  And isn’t that our jobs as parents, to positively impact them for the rest of their lives?