Growing up, one of my favorite Super Heroes was the Green Lantern.  Whenever he showed up on the Super Friends, I was in awe.  So, when I saw that among the various comic book and cartoon heroes coming to the movies that the Green Lantern was one, I was thrilled.  Even more thrilling was sharing this hero with my sons along with some great toys by Mattell. 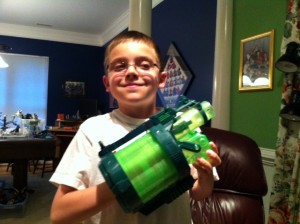 First the disclaimer: I wrote this review while participating in a blog tour by Dad Central Consulting on behalf of Mattel and received Green Lantern toys to facilitate my review and a promotional item to thank me for taking the time to participate.  There, I feel better.

So the two toys we received were the Green Lantern Colossal Cannon Blaster and the Kilowog Action Figure.  The action figure was about the same size as other figures (Star Wars, GI Joe, etc.) so it nicely fits in with inter-theme play.  Kilowog is not a pretty man (or thing) but the figure seemed solidly built, came with an add-on to the hand to show a blast of green (likely from Kilowog’s ring) and came with a Green Lantern ring the boys could wear (they seemed to like that most from this package- my 8 yr old took it to school to show his friends).

I imagine scenes from the movie and even those created from a child’s mind can be played out with a full array of the action figures.  I am guessing we will be adding to ours as they become more available.  The figure was adjustable at the knees and shoulders but not at elbows or ankles, etc.  making is perhaps less flexible but more stable over time than some other action figures.  The boys didn’t seem to mind and hopefully Kilowog is fine with hanging out with stormtroopers until some other friends can be found.

The Colossal Cannon came with disks that you load through a trap door in the top.  The cannon shoots the disks (plastic, green disks slightly larger than a quarter) and lights up when it fires.  The disks fly fairly well, looking like small Frisbees floating across the air.  Some tend to lean to one side and crash to the floor but most kept floating until they hit something (luckily, usually a wall or door). 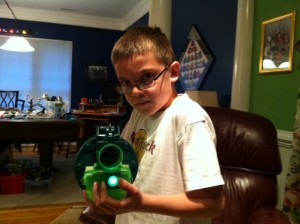 The boys had a lot of fun with the cannon.  My 10yr old was shooting and reloading at such a rapid rate that I had to duck more than once to avoid being his victim.  The unit does make quite a bit of noise when being fired so after a couple of rounds of disks (it comes with 10 or so), I asked the boys to take a break or move to another room when I was working.  But the lights and sound are a big part of the allure of the cannon with the boys so noting that I was being a scrooge, I let them continue firing away until it was time to do their homework.

The gun has a cavity that the shooter puts his hand into to hold the handle and trigger.  It is large enough for an adult hand so there is no worry about size and it is easy to use without instruction- they kids will figure it out.  The construction seems solid and it even has an off switch that can help conserve battery power.  Loading is easy and thus far it hasn’t jammed on us.

It took a couple of days for my youngest to stop greeting me in the morning with the Green Lantern ring on, talking in a deep voice and pretending that he was creating things with his ring.  And although I was threatened many times with the Colossal Cannon, I have survived to write this review.  I think Mattel has created these toys to last and meet the “fun” needs of the kids for whom they are targeted.  I am sure they will be renewed attention when we see the movie and further scenes can be acted out with them.  Until then, perhaps I too can become a Green Lantern like the favorite I used to watch on TV.