Last weekend we we decided to have lunch at a local favorite, Cheeburger Cheeburger.  It was a chilly Saturday and we had spent most of the morning outside so we were looking forward to some warm food in a warm place to sit down.  My wife and I had participated in the Monument 10k run that morning and then joined my mother-in-law and the boys for my oldest son’s soccer game.  So hungry, slightly tired and a little chilly, we headed to lunch. 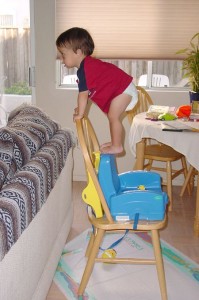 Our first interaction with another family eating there was slightly unpleasant based on the criteria described above.  Their oldest son, a boy who was probably 5, repeatedly opened and closed the door of the restaurant while we were seated next to it waiting for table.  With every open of the door, a blast of cold air would rush in.  He came in, went out, at least a dozen times before his mother took notice.  Her attempts to stop him were initially thwarted but finally, she was able to get him under control (and just as I moved toward the door intent on locking him out).

As luck would have it, the family was seated at a table just next to ours.  Over a dozen tables in the place and we get them.  Surely our incident with the door was a rare case of lost control.  Surely with thing to color and food coming, the boy and his brother would be little angels.  Surely the delirium of the morning had finally gotten to me.

The boy stood up in his chair and began yelling and acting up.  He hopped up and down, played with his food, with his father sitting next to him all the while, ignoring him like you would a drunk on the subway.  The boy finally sat down, I think because he lost interest, but before long he was standing  up and at it again.  I was embarrassed to be sitting at the table next to him!

But then, his mother had finally had enough.  She corrected him.  She laid down the law.  She told him “We don’t stand on chairs in a restaurant!”.

What?  That was it?  Does this mean standing on chairs is okay at home?  Or perhaps at the home of someone else.  Perhaps it is okay to stand on chairs at the airport or in church.   If it were someone else I may not have questioned it but with the track record established by this family in a 20 minute exposure period, I got the impression that she meant exactly, and only, what she said.

Rules for kids need to be universal.  They need to be across the board.  They need to apply to all places, times and situations.  We can’t ask a 5 year old to discern between home and away.  You can jump on the kitchen chair at home but when we are at a restaurant, you cannot.  Certain rules have to be universal and rules of etiquette and general manners should not be limited in any way.

If a child is allowed to act up at home it will become their nature.  The enforcement of rules for how they act must be applied to all elements of their life.  Whether it is school, a friend’s house or even with family.  Granted, many times there is the Grandma clause where kids learn they can get away with misbehavior around their parent’s parents, but much of that is payback to us parents by our parents!  Even those times, manners need to be addressed and enforced.

If we pick and choose when our children should behave, and throw in the towel at times to let them run wild, they will eventually deteriorate to the lowest of what is allowed.  This is where brats and bullies are born.  Even if you are not stern or strict with your children, at least be consistent.  Don’t let locations or times exist for mayhem.  If you do, those times will spread into places you don’t want them to be.  And before you know it, you will have a kid jumping on the chair in a restaurant with no control over them.