It is always nice to have some affirmation that you are doing something right as a parent.  Those rare moments that make you smile because something or someone has worked out right or taken some form of “Yeah, that is how it should work!”.  Granted, these gems don’t happen often and sometimes can be disguised, but they are joyful none the less. 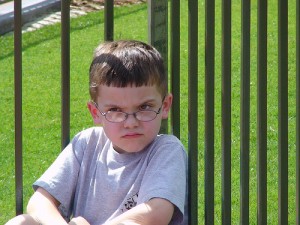 Take for instance yesterday morning.  My oldest son had just completed the laborious task of getting dressed so we could go to brunch.  It is such hard work getting ready for someone to take you out for a meal.  He was sure to let us know how hard he was working and how time consuming all of it  was that, keeping him away from his play.

It wasn’t until he had completed getting dressed and returned downstairs that I asked him “Did you brush your teeth?”  The response – “Ugh!”.  I could hear him slumping across the floor headed for the steps.  And I smiled.

I smiled because at that moment he was returning to do what he knew he was supposed to have done.  He wasn’t arguing, he wasn’t whining (beyond the “Ugh!”), he was doing.  He was succumbing to the expectations of his parents.

Granted, the ideal story is that our children do what they are supposed to without being told.  They get dressed with cheer, brush their teeth and stand at the ready for their marching orders.  And perhaps I am setting my expectations too low to say this but, cheery completion of everything is not realistic.  At least not in our house.  They are going to forget, they are going to avoid, we are going to have to remind and push.  As far as I am concerned, it comes with the job.

But to go to the other extreme, to have every command met with strong resistance that leads to heated discussion and even some raised voices- I’ll take the “Ugh!”  If they can recognize what is right and do it, even with a little reluctance, then I feel I have won.  I have trained them and eventually they will see the importance of things like brushing their teeth and do it on their own.  More importantly, they have learned not to object and start a heated argument but to simply do what they know they should do.

Sure, the “Ugh!” is a small victory, but somedays you have to take what you can get.  Like I said, affirmation that we are doing anything right can be hard to fine.  So if you hear the “Ugh!”, smile, pat yourself on the back and be happy that you will all live to fight another day.  Choose your battles and continue to make an impact.