Tear Down that Wall

Recently we have been doing some remodeling in our kitchen.  What started with a hole in the ceiling from a leaky pipe turned into new lighting, a new kitchen table and taking down a half wall between the family room and the kitchen eating area.  As the wall went down, my wife commented “Now I can see my boys and they can’t hide from me”.  She was joking of course, the boys can rarely hide from us (effectively) but it made me think about the metaphorical meanings around that statement. 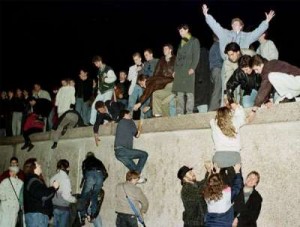 The first thing that popped into my head was the Berlin Wall.  I recall when they tore down the wall.  An act that was a symbol of freedom and the demolition of a physical and psychological barrier.  It was a changing of the tide, a time when we not only saw the wall being broken down by people with pick-axes and sledge hammers but also the Cold War ending and the barriers created between the U.S. and Soviet Union crumbling down.

Obviously our kitchen wall required less effort, involved fewer people and had a slightly smaller impact on humanity.  It more or less opened up our kitchen to make room for the new table.  But it also seemed to lighten up the house, to open up the rooms and together with the new lighting, add a new perspective and a freshness to our downstairs.  Change was good, at least for this project, and removal of our wall made a big difference.

But back to my wife’s statement.  Was the wall really blocking her from seeing the boys?  No, it was only a half wall.  Unless they were crouching behind it, we could still see them (on the couch watching TV or flailing around the family room playing the Wii).  So again, the metaphorical aspect of it to me was more of openness, freedom, light shed on the shadows- that sort of thing.

How many times do we have a wall, even if it is only a half wall, that makes us feel less open, less free, restricted in some way?  Think of what may be nagging at you in the back of your mind.  Is it work?  Is it a relationship with your wife or kids or a friend?  Is it something that you want to be doing but haven’t, for whatever reason?  Is there some half wall in your life that is restricting you?

I think most of the time many of us can say yes, there is something that is nagging us.  It is those things, sometimes buried deep in our minds, that cause us to react a little over the top at spilled milk or in traffic or in other stressful situations.  Those little half walls that prevent us from feeling open and free, that although they don’t completely block us off, we can see over them, they hinder us, hold us back, give us a feeling of constraint.

Many times my half wall is time related.  I want to write more on the blog or record a new podcast or do more with marketing the site.  These are things that I often put lower on the priority list, below time with the family and exercise.  With a full day at work, a few hours to spend with the family and sufficient time to get the blood pumping, most days result in about an hour or two of free time.  As such, my desire to be creative often makes time limitations become the little half wall in my day- I know I want to do something about it but I look over it and feel restricted.  Thus my focus needs to turn to how to better manage my time and break down that wall, feel free and open.  I am working on it.

What is your half wall?  Is there anything that is putting you on edge, even if just a little bit?  Find a way to break it down.  Be free.  Don’t let your kids or famly hide behind that wall, open it up and see everything more clearly.  It is only a half wall after all, make it gone and enjoy life without that barrier.  And, if you know of any way to make the day a little longer, drop me a line!!!