I had another article posted over at RichmondMom.com, go check it out.  It is about my oldest and his participation in an eight mile, night time bike ride.  It was quite a challenge for him and one he took on bravely and successfully. 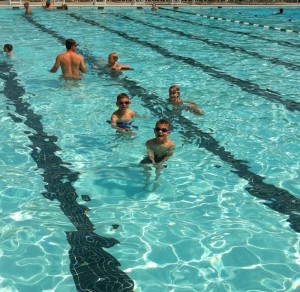 My youngest also had his day in the sun, literally, in the waning days of the Summer.  He started the pool season being able to swim short distances under water but unable to maintain any sense of a stroke with his head up, bobbing or otherwise, for any distance.  Well, that was a challenge he finally was inspired to overcome.

Little by little during the Summer he began swimming.  His method is kind of a dog paddle meets side stroke meets panic but aside from being very inefficient, it seems to work.  He started with a few stokes to move from the wall to where I was standing then with me backing up a step each try, extended his range.

At some point he decided that jumping into the water would be helpful.  I am fairly certain that he is using more energy getting back to the surface than he would coming off the wall (not to mention the fairly common belly flop) but it seems to help his mental state.  So, with as much grit as stamina, he set out to cross the pool.

He started the same way- jump in, swim to me, I step back a step and we start again.  Soon he wanted me to back up more than a step at a time.  He went from swimming 10 meters, to 15, then skipped right up to the full length of the pool.  The full 25 meters.  Winded but beside himself with pride, we all celebrated his achievement.

But as is his nature, he didn’t stop there.  He did it again, then again.  After 6 times across the pool (again, with his swimming stroke that made me tired just watching it), he tried to figure out how to go farther.  He tried a couple of times to hit the wall and turn, but didn’t get far (5 meters at the most).  We were still amazed with his accomplishment and he was exhausted.

So it was a big end to the Summer for both boys.  They both took on challenges and achieved great success.   They both impressed us with their tenacity and will power.  Now I am challenging them to take on each other’s accomplishments – for my oldest to improve his swimming and my youngest his riding skills.  Perhaps we will have to wait til next Summer for the swimming but this Fall will be a push on the cycling!