My dog ate my homework

I strive to make sure that my boys have the chance to experience all of the stereotypical childhood joys.  A few years ago I piled up leaves and let them (and a few neighbor boys who looked at me like I was crazy) jump and play in the pile to their hearts content.  In the snow it was snow angels and snowmen.  We have planned, although record heat delayed those plans, for the classic backyard campout, after a few family room campouts.  And, without even trying, we achieved the notorious “dog ate my homework”. 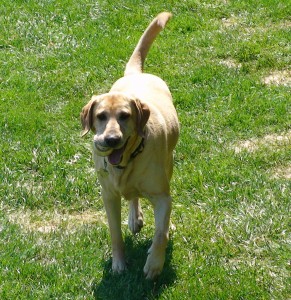 The way this happened was surprising, to say the least.  First of all, it is Summer.  There is no school.  So why homework?  Well, much to my surprise when we signed my youngest up for soccer camp and paid for his week of fun, soccer camp includes homework!  He came home the third day with a project to find out three things about England, the team he was assigned to for their World Cup Camp Tournament, and as such, his team would get extra points for finding out facts about their team country.  Easy enough with Google and Wikipedia available.  But, the next night he had to create a country flag with special prizes for the largest, smallest and most creative.  Big was out of the question (to pull off in a couple of hours that night) and small just seemed wrong, so we sought the creative, for which he seemed to already have a plan.

He wanted to make a flag out of Rice Krispie Treats but without all the proper ingredients (like Rice Krispies) we found ourselves a little too crunched on time for that one.  He also wanted to do something with Gummy Bears.  So, we get a piece of cardboard, some tacky glue left over from a school project, a bottle of Gummy Vitamins (that my oldest won’t take) and marshmallows.  With these we were able to pull of the flag of England (not the British flag mind you, the England flag that is simply a red cross on a white backdrop).

So flag made out of food, with the title, you can see where this is going other than the fact that we are currently “between dogs”.  This week, to help coordinate the week of camp (more to come on that in a future post and podcast), Jen’s mom is staying with us and with her are her two dogs.  We love having the dogs around and they are a lot of fun, but they also tend to keep us on our toes regarding what food we leave out.  The older of the two labs has a tendency (actually more of a habit) to climb up on the kitchen chair and grab food from the table.  She is pretty sneaky, and pretty quick.

My youngest noticed the dogs sniffing and looking up at the table when we were working on the project and he noted that we probably wanted to place it high for the glue to dry.  So we put it on top of the fridge for the night.  The next morning we got it down, cut out the flag from the larger-than-necessary piece of cardboard and affixed a flag pole to it with the hot glue gun.  I set the finished flag on the table to dry.  For a few seconds while the boys brushed their teeth and I sat down at the laptop in the next room, the project was unguarded.  Just for a few seconds.  But that was enough.  By the time I realized what was happening and got back into the kitchen the dogs had the flag on the ground and had all but licked off a second of marshmallows.  Luckily no Gummy Vitamins were consumed but the flag looked a little worse for wear.

We were able to fix it pretty easily and decided it was best protected for drying in the car.  He didn’t win most creative for the project but I am pretty sure he had the best story to tell.  And we fulfilled another stereotypical event in a child’s life- check another one off the list.  I guess now it is time to take advantage of the cooler weather and break out the tents for the backyard but first, we have to make sure the campground is free of dog items, and any extra Gummies.