The Dog, the bone and his reflection

Tommy had his bike and scooter out in his driveway.  A friend, Phillip, came over who had neither.  Phillip asked if he could ride one of the Tommy’s vehicles.  Tommy assessed options and determining that he could not indeed ride both of them, he opted for the bike and let his less fortunate friend use the scooter. 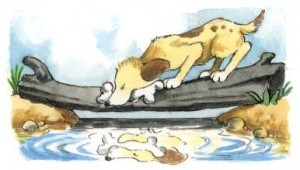 Philip on the scooter was thoroughly enjoying himself.  He after all had come with nothing and now had something to enjoy.  Tommy on the bike saw this enjoyment and realized he was not having nearly as much fun on the bike.  So he changed his mind and asked Phillip to switch.

Phillip readily offered up the scooter (beggars can’t be choosers) and hopped on the bike.  He seemingly enjoyed even more than the scooter.  And Tommy now on the scooter enjoyed it even less, focusing instead on the enjoyment of his friend on the bike. The bike hadn’t looked that fun when he was on it.

So once again Tommy instituted a switch.  And once again, Phillip seemed to enjoy the scooter more than Tommy was enjoying the bike.  Finally, Tommy realized he could not find peace with this tradeoff and instead informed Phillip that he needed to go inside, thus ending the play time.

So it seems that Phillip, who came with nothing, was able to find happiness in anything.  And Tommy, who had everything in this situation, could not find joy in any subset of what he had, he was too busy worrying about what Phillip was doing.  Or perhaps he was too busy worrying about comparing what he was doing and what his friend Philip was doing.  Whatever the issue, Tommy was unable to enjoy the play time and found ending it better than enduring it.

Does this story sound familiar?  Perhaps similar to the dog with a bone in his mouth who drops it in the creek when he sees his reflection and greedily desires to have both the bones?  I’ve tried to explain that proverb to my boys to help begin training them that greed, the inability to share and an obsessive need to have or control everything, will likely lead to the inability to enjoy it.  “It” can be an event, a playtime, a relationship or even life in general to some degree.

The above story is hypothetical.  It actually came to mind as I was running today.  Two boys, one on a bike and one on a scooter were riding circles in the street and I overheard one ask if it was time to switch yet.  It reminded me of similar events in my life (you can probably think of a few in your childhood as well) where friends share but in that sharing, sometimes it becomes difficult.

We can help our kids through these difficult situations by instilling in them a mindset of sharing early on.  We know when kids are younger, the “Mine” phase takes over for a while and can be tough to curb, especially for the only child or a child who has little time with siblings near their age.  With our boys, and with them being close in age, we have been able to avoid a lot of the “Mine” issues, but they do arise from time to time.  And they are typically squashed quickly- we have little tolerance for arguments around ownership.

Granted, from time to time one of the boys will take/mess with his an item his brother is clearly playing with or at least has laid claim to just to get on his nerves.  For some reason brothers feel the need to poke each other every so often.  These scenarios are perhaps the only ones where we enforce some aspect of what belongs to whom.  Otherwise, we try to apply the wisdom of Solomon and offer to destroy the toy that is being fought over (see pervious post around this topic).

So help your kids enjoy themselves, in play and life.  Help them learn to play openly, to “worry about themselves” (another blast from the past) and be capable of sharing for mutually fun time.  Once they turn the corner on this, once they realize that there is more fun in being more concerned about the fun of the group (even a group of 2) rather than comparing their enjoyment to another, they will be set to look at things differently and improve their enjoyment of the activity.