Over the holidays we took the kids up to my in-laws for a few days to visit with family and let them play with their cousins.  My Mother-in-Law had a host of activities planned to make sure the kids didn’t get bored.  Not like they had much of a chance since “togetherness” seems to always add that extra level of excitement that we parents just can’t provide.  But, it seemed to be a concern so each day had a special activity.

The first day, after a morning Nerf battle (wall to wall darts in the basement), the clan headed to Chuck E Cheese.  It was just my 2 and 2 of their cousins (other cousins were coming) and yet I think they were able to dry up the well of tickets at CEC quite well.  My Father-in-Law is hoarding tickets until a big prize can be bartered- I can’t recall how many thousand the kitty is up to these days but the top shelf is well in reach.

Day 2 was bowling.  For this, Jen and I joined in and we all had a blast.  My youngest, using a ball much too heavy for him, achieved something that I thought I would never see in real life.  He bowled in the lane next to him and knocked down 4 pins.  He was using a “sling it from behind me” technique that made all the adults cringe each time he approached the lane, typically in a full jog before he slung the ball around with no aim.  The little girl in the lane next to us (whose pins he knocked down) was amazed but took it well.

Day 3 marked the arrival of 3 more cousins (2 nieces and a nephew) to add to the fun (if you call picking on each other fun, that seems to be how they re-introduce themselves to one another).  After a morning of PS3 Madden football (a Christmas additions to our house), we loaded up and headed to play LaserTag.  Note, getting to LaserTag when they open seemed like a good idea, especially when it appeared the parking lot was empty.  Then, when we realized we had parked behind the building, we also realized that this was going to take a while.  Birthday Parties get priority so we sat for over half an hour before our first briefing.

For those not familiar with the sport (this was my first time), this is how it works.  You wear a vest with a big panel on the front and back that receives the laser signal of another shooter.  You also have two receivers (with blinking lights) on your shoulders and each side of your gun.  You are split up into teams (we had Red, Blue and Yellow) with all your lights flashing your team color.  The guns require that you hold them with two hands (heat sensor on it senses the second hand) and if shot, you are disabled for 30 seconds (if shot in the front or back panel) or stunned for 15 seconds (if shot in the shoulder or gun). There is also some nonsense about taking over another team’s base but I am not sure I got the full grasp on that one.

We played 4 games/rounds of LaserTag.  The first two pitted our group (me and the 7 kids ranging in age from my oldest nephew at 13 to my youngest son at 7) against another family group and a group of people who unwittingly came just to have fun and got stuck with the family feud.  After each game of approximately 15 minutes you leave the dark maze of the playing field (the only way to keep from walking into walls sometimes was to follow the glow of my own front panel- it was really dark in there) each player took off their gear then headed to the lobby to check out the stats.  Each player was scored for points and accuracy.  Based on the flyer I read while waiting, you got 200 points for each person you shot and lost 50 points for each time you were shot.  You also got points for taking another teams base, something like 2000.

In each of these two games my oldest nephew ranked highest on our team (our team typically came in behind the other family but they had more players so their total points were higher).  And my nephew didn’t win by a little.  He won by a lot- something like 12,000 to 5,000 for the second place player (I finished second on our team the first round and third the second round).  I could not understand how he did it, how he blew us all away so badly.  So, I decided to change my style (yeah, I know, not very competitive, am I).

Game three we had the place to ourselves so we split into 2 teams of 4.  Unfortunately my pack didn’t work for most of the game and at the end, my score wasn’t included so I had no idea how my new strategy worked.  For game 4, we were pitted against a new family of 5 players, some of whom were newbies.  This was a real blast.  We were able to work as a team and take out opponents at will.  I laughed at one point when I looked up and saw the kids staked out along the half walls of the second level like snipers taking out the other team as them meandered around the first floor.  It was a thing of beauty.

And I also had the chance to work a new strategy.  I made sure I captured the other team bases (2 bases for 2000 points- you got points for the third team’s base even though there was not a third team).  I also made sure to stalk the opponent, to stay on the first level and pick them off repeatedly.  I was certain that I racked up thousands of points myself just picking off the newbies, sometimes without them even seeing me.  And here is where the lessons begin.

1) You never know how good or bad you are doing just by how you feel.  I felt like I was doing great, in the end I was fourth for our team.  Either the game is fixed or the snipers did a better job at hitting people than I gave them credit for.  Whatever the reason, I was thoroughly surprised that I didn’t fare better.  And that is a life lesson if I ever heard one- you never know how you are going to fare so just do your best and if you can, get an interim assessment, don’t wait til the end.

2) Perhaps it is destiny, perhaps it is skill and perhaps it is some self fulfilling prophecy but my nephew scored at the top each and every game.  Granted, he is coordinated, quick and an athlete.  He plays baseball, tennis and does well at most anything he does.  He is also expected to do well so along with some topics on the podcast recently, perhaps that expectation somehow feeds into the results- he expects to do well, everyone expects him to do well, and alas, he does well.  Whatever the reason, I was scratching my head at how well he did and the best I can determine is that he was able to elude getting shot better than I was or the darn game was broken!!

3) Everyone has a competitive spirit.  My nieces were into it, I was into it, my youngest was into it.  Everyone wanted to play, play hard and come out ahead of someone (read lesson 2 to realize that we knew we wouldn’t come out on top, again, maybe us feeding the prophecy).  The lesson here is to take advantage of this spirit.  Make it work for you.  Challenge your kids and tap into their competitive nature.  Don’t over use it but use it when you can.

So aside from an absolute blast we had with LaserTag (we were there for about 3 hours- I am pretty sure they let the last two games go long), I found these three items to share as lessons.  As I always say on the show, we can find things to learn and teach in almost anything.  And typically we can have fun doing it.  I plan to include more on the LaserTag adventures in the next podcast but wanted to get this out in the interim 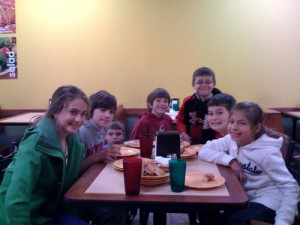